Swift is the recent trend working front of Java. Similar to Java, Swift is undergoing multiple updates every day. It is on the way to become the robust language that can be used as a platform where complex applications can be built.

Currently, a couple of versions of Swift have been released which includes 5.0 and 5.1. Be it Java or Swift, both of them are playing a significant role in taking the language to the next level. In this blog, we have discussed the importance of SwiftUI in developing the iOS platform.

Role of SwiftUI in iOS Development:

The biggest achievement is the stability of ABI in Swift 5.0. This stability would benefit the engineers in iOS application development since a lot of Swift libraries are incorporated into iOS, tvOS, watchOS, and macOS. As the apps would not include libraries within them. Hence, applications should be lighter and small in size.

This fancy new thing called SwiftUI will make the process of iOS development hassle-free. Being a developer or a team of developers, you should be well aware of the business requirements before getting started.

For instance, if your business forces you to support versions prior to iOS 13.0, then you need to know how to utilize storyboards and UIkit by also knowing the best practices of iOS development. Here comes the best option none other than SwiftUI.

As this strategy is easy to pick up and learn, most developers are adapting to this trend. The developed iOS application will benefit from the following features: 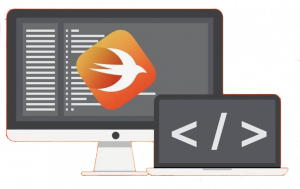 When it comes to the package manager, here are the features that are to be included:

These features would be highly beneficial for both iOS app development as well as for the developers who are involved in the development process. However, it is important to be used in the right way.

The most important thing that would help the business is ABI (Application Binary Interface) stability. The code is written in Swift 5.0 can be effortlessly used for Swift 6.7 or more. The language is considered ideal for Startups as well as Enterprises.

The language binary has become compatible with Swift 5.0. This is because the dynamic library which would be used by the application would be shared among apps and cached in the memory.

If in case the application is broken or results in app freeze or glitches which would be the greatest disadvantage among users and would result in uninstallation. It is important for an organization to avoid this completely.

Moreover, developing applications with Swift 5 would be a great choice. You as a developer would have written even the older apps in Swift 5. The new businesses would benefit a lot from it and therefore they can utilize Swift for iOS app development.

Swift language comes with the following set of features:

Syntax refers to the set of rules and regulations which emphasize the order, as well as the inter-dependencies of words within any programming language. Although Swift is considered as the objective C, there comes a lot of differences when it comes to the condition, invocation methods, cycle, classes enumeration, and declaration of constants.

Objective-C happens to be the incorporation of open-source libraries containing solutions for routine jobs and enables the reduction of app size, and hence saving a lot of space in the memory.

One major challenge with Objective-C is difficulty in evolving the language employed for developing iOS applications. Because of this identical reason, most iOS developers needed to maintain two files for enhancing efficiency and build time.

On the other hand, Swift will be able to combine the implementation of files and the Objective C header into a single code file. Yet another drawback of Objective C is it was imperative to synchronize method names manually. With Swift, programmers can create app logic and improve the quality of the code.

Swift language becomes concise and it can make the process of programming more effective and quicker. Developers don’t need to type long lines of codes to perform complicated tasks and hence time can also be saved easily.

Swift has the complete capability to manage dozens of data at a single time. It makes use of LLVM as well as operating systems. The developers will also get an opportunity to rewrite several groups in the form of structures.

Swift language is fully interactive where developers can view their output and can also view errors in the coding screen.

Read Also – When to Choose React Native for Building a Mobile App and When to Avoid It?

Being a comparatively new programming language, Swift has become an easy and user-friendly way for developers a more reliable and safer code. If in case you are looking for one of the best iOS app development services on the market, you should not make any hesitation and go for Way2Smile blindly.

We offer top-notch services to our clients as per their requirements end-to-end. You can get in touch with us quickly to get started.